I told Danny I was writing a memoir 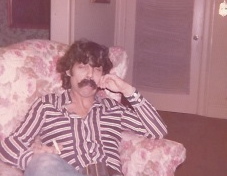 I told Danny I was writing a memoir. In My Humble Opinion that took guts. Maybe it was even stupid. We were sitting on the outside porch at my house, having a nice conversation about I don’t remember what, and I tried to off-handedly mention the book and my agent.

Why, you ask? Why did I risk telling him? Why would I do that when I’m afraid of what he will think when and if he reads it? I don’t even think he can or will read it. He doesn’t read anything anymore, not since his stroke – except for French books on the iPad we got him, because they’re backlit and he can make the type huge. He says it’s not fun to read with only one arm and one eye that work. So why did I tell him?

We were having a nice time together. One of the first simple, pleasurable conversations we’d had in a while. I was enjoying his company and I think he was enjoying mine. Why did I risk that? And he truly believes (I think) that the worst thing that happened to me because of him is that he left us to live with my mom when we were little. That it was only the Church that made life tough for me. That everything with him was fine.

“So Danny,” I started. “Do you remember that I was writing a memoir?”

“Well you knew at one time,” I continued.

“And I got an agent,” I stammered.

“Oh. Well when you get me glasses (I had just promised to buy him new glasses as he had lost all his pairs), I’ll read it.

That was it. Then he mentioned how amazing it was that I came out of my experience in the Church so relatively unscathed. It was a simple conversation. A quick one. And it left me with questions. How would I handle it if he read it? I didn’t expect, didn’t want, him to actually read it. How would I handle it if he asked to read it? I couldn’t pretend it didn’t exist. That I hadn’t written it. I couldn’t just not give it to him. Well, I could. It’s not like he could get it himself. But I wouldn’t

I love my father. I feel blessed for that. I don’t need him to understand my perspective of what happened. I don’t need him to apologize – although maybe it would be nice. I just can’t lie to him and pretend I’m not doing this. I’m proud of and excited about doing this. Maybe he’ll respond as well as my mother did. Maybe we’ll talk about some of what occurred to and around me, and how it seemed to me. Maybe we won’t. But I told him about my memoir and my agent. Now we’ll see what happens next.