I made it down a mogul studded, black diamond run! 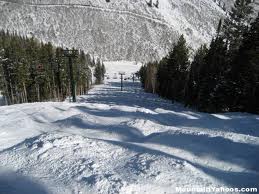 My son says it doesn’t really count since we only ended up on the black diamond run because we were trying to get off the double blue square mogul run that was too icy. And we didn’t ski the whole black diamond run. But I will tell you that I skied a mogul black diamond, even if there was nothing pretty about how I skied most of it. I didn’t wipe out. I didn’t have a spectacular fall. I did stumble (as much as one can stumble with skis) my way down, the tips of my skis pointing clearly in the wrong directions at times, my legs splitting beneath me as I tried to maneuver something I pretty much had no right to try and maneuver.

And yet I’m proud. If you knew my ski history, you might be proud of me too. Native New Yorker that I am, I never skied in my childhood. When I was first introduced to skiing I was in my early twenties, and I was, back then, as stubborn as I am now. Maybe more so. I hated the fact that I couldn’t easily do this thing that I had never done. I hated learning to do anything new, anything that required a period of time of incompetence.

So on my first ski trip I spent the morning in ski school, embarrassed that I was an adult in ski school, learning something that children who seemed to come up to my knees (or at least my waist) did effortlessly. And then I spent the afternoon skiing and falling, and skiing and falling, and skiing and falling, so that by the time the ski lifts were closing and my friends and I were on the wrong side of the mountain from our car, I prayed for someone to go get the car and come pick me up. But instead I was told we would take the lift up and ski back down to where we were parked. Only I was so tired that when I fell (which I did often in my attempt to ski), I couldn’t seem to get back up. The ski patrol actually came by on their snow mobiles, asking if I wanted a ride down the mountain. But I was too stubborn to give in, so I forced myself to ski (and fall) the rest of the way down.

And then my husband started our family skiing. And skiing some more. I began to be a bit okay with the fact that I wasn’t very good. I certainly wasn’t very fast. I was a cautious and nervous skier, and my kids quickly surpassed my abilities. But I still kept going, and allowed myself to find the fun in it.

And then this trip. Just my husband, my son, and myself. I became more willing to try new things, and to try runs that daunted me. I followed my son off of small jumps – and again, wiped out so outrageously that eventually the ski patrol came to try and help me get back up, and I laughed until my sides ached as even they couldn’t seem to get me easily righted – and through tiny moguls. I picked up speed I never had before.

Then we got stuck (at my husband’s suggestion) on the double blue square run that was mostly ice, and my son convinced us to move over to the black diamond to have an “easier” way down. And I went. And I skied it. Or at least I made it to the bottom of the mountain, even if you wouldn’t really call it skiing. Not pretty, but I did it.

And I’m proud that I skied (at least partly) down a mogul studded, black diamond run.