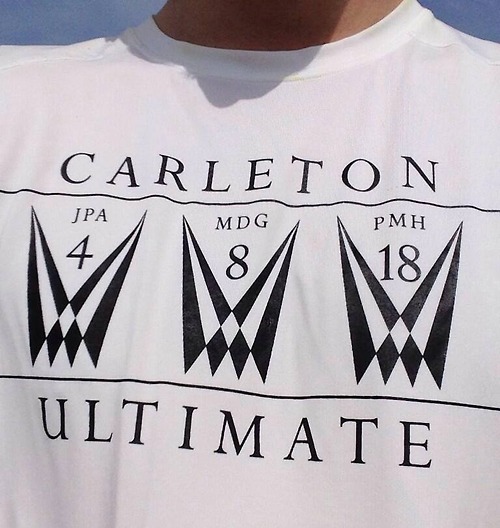 Another post from my favorite guest-blogger – my daughter. Enjoy!

In memory of Michael, James, and Paxton, and in prayer for Will and Conor

About four weeks ago, a tragedy struck Carleton. CUT, our nationally ranked men’s ultimate Frisbee team, was on the way to the airport for a tournament in California when one of their cars spun out on the icy road. Three players – Michael Goodgame, James Adams and Paxton Harvieux – were killed and two – Will Sparks and Conor Eckert – were seriously injured. Our campus is still reeling from the shock.

At first, it all seemed fake; a nightmare conjured by over-stressed minds as we geared up for finals and end-of-term papers. A close-knit campus of 2,000 students isn’t supposed to lose three members just like that. But of course it wasn’t fake, and we had to figure out how to live with the reality. Which meant a lot of things.

It meant understanding. Carleton runs on a trimester system, where every term is 10 weeks long. The accident happened on Friday of eighth weekend, when work levels are already high and are steadily rising. By ninth week, it’s hard to get everything done even if you’re not an emotional mess. So our professors postponed tests, essays, and assignments. I’ve talked to multiple friends who said that even if they had to ask for an extension the night before something was due, the professor was willing to give it. Ninth weekend was our MIAC Conference Championships for Indoor Track. Normally, our coach would remind us to focus on our races all week. This year, she told us to focus on taking care of ourselves. “Don’t worry about Conference yet,” she said. “The race will happen on its own; right now what matters is being there for your teammates.” I needed both of these concessions. I gave very little thought to Conference, or to my homework, during ninth week. I gave nearly all of my thought to the emotional rollercoaster I was – and am still – riding, to being there for my friends and asking for help when I needed them to be there for me.

Because they were. Next to understanding, from professors and from coaches and also just from peers who knew that everyone grieves and copes differently, was support. The support shown on this campus was absolutely remarkable. There were the big things – our parents and alumni organized Friday Flowers for the whole campus, so on the one-week anniversary of the accident there was a white carnation in every single student’s mailbox. The students at St. Olaf, the other college in town, sent over something like 1,000 Friday Flowers as well. At the Conference meet, every Carleton athlete put a black strip of tape on the left shoulder of his or her uniform in memory of the student-athletes our campus had lost. My RA drove shifts of people to and from the Twin Cities day after day – sometimes multiple shifts in a day – to visit Conor, who lives on our floor. At the expense of doing her homework, at the expense of even seeing him – his time with visitors was very limited, so she left that for us – she drove back and forth and told us as long that as we kept saying how reassuring it was to see him, she would keep doing it. And there were the little things, which sometimes mattered even more.

The little things are things like companionship, like our floor watching two movies and going out to dinner that weekend so we could be together and take our minds off of things. Things like how we all hung out in the lounge all the time, sitting together as we talked and ate and worked and played board games. The little things are things like barging into your friends’ rooms and interrupting their conversations because you need to talk, and they drop what they’re doing to listen. Things like teammates asking how my floor is doing. Things like hugs. Sometimes it was as simple as that.

“Maybe home is nothing but two arms holding you tight when you’re at your worst.” – Yara Bashraheel.

We all grieve and cope and process differently, but for me this symbolizes something. Somewhere in the space of the last few months, Carleton had become my home. I had forged friendships strong enough to become my support system in this storm. Last September, these 2,000 students were all strangers. In the last few weeks, as we were all undeniably at our worst, Carleton hugged us and we hugged each other. The floor mates and friends whom I’ve only known for six months became the pairs of arms that held me tight. There is nothing we can say or do to fix the pain we all feel, but sometimes, because they symbolize all the understanding and support and home, because they’re all we have so they have to be, two arms are enough for the moment.