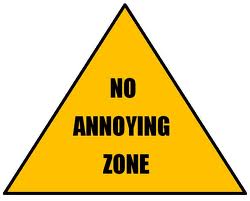 I don’t think my yoga instructor meant it as a joke, but when she said “Don’t be annoying,” I cracked up. Even though I was in the midst of a yoga pose. A relatively serious yoga pose. Don’t be annoying. “Ok, I won’t,” was all that I could think.

She was talking about people who seem to always “know better.” When they tell you that they know better, it’s annoying. So, she advised, “Don’t be annoying.” But I heard it in the larger context and it made me laugh. (And it still does.)

But I like that advice – to not be annoying. I would say that we all should walk through life trying to avoid being annoying…but I would sound like I “know better,” and that would probably be annoying. So instead, I’ll let you know that I’m going to try and stop myself.

Which may be tough, because one person’s annoying may be another person’s delight. What my daughter may love my son may hate. And vice versa. Actually, I know that to be true, because they almost always pick opposites when given the choice. But I can do my best to steer away from annoying. I can have an annoyance meter running in my head, and when I notice people rolling their eyes or walking away, I can let it kick in and see if I can change my behavior or my attitude.

“Don’t be annoying.” Maybe today that can be my mantra. It’s certainly one good way to add joy and love to the world.