I passed someone again! 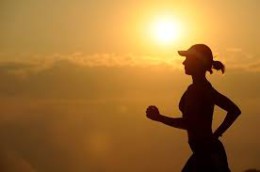 I hadn’t been running in months. I had injured my right hamstring, and, needless to say, running had been forbidden by my doctor (and Kyle, my physical therapist).

That seemed restrictive to me, but I agreed. I was in his care, after all. Then I laced up my sneakers (it had been so long since I’d run that I forgot to double-tie them!) and headed out. I quickly realized that slow and short was my only option.

I had lost everything, or at least almost everything. I never actually ran fast or long (my longest run to this day is six miles, and my fastest pace for anything three miles and over is probably just over a nine-minute mile), but I’d gotten to the point that I’d felt proud of my speed and distance. Now, not so much. All I could do was plod along and feel like, as my son would say, “poo-poo in a can.”

“Am I slower than I ever used to be?” I questioned. “Even when I first started?” I told my husband and he explained that one loses running ability quickly. More quickly than one would think possible. “But I’m so slow,” I thought, even as I tried to believe what he said.

I tried to have faith. I tried to keep running, and to not beat myself up for being so slow. “I’m not allowed to go faster,” I’d remind myself.

Then I headed out one morning, bright and cheery and eager, until my RunKeeper paced me at over 10:15 per mile. “Seriously Lisa!” I thought. Still I plodded along.

I did. I took him. I smiled and pumped my fists (as much as I could, jogging along). Who cares that he was older and perhaps injured. I wasn’t slowest.

And I could be psyched – so psyched – that I passed someone!