Maybe my granddaughter will go to Williams… 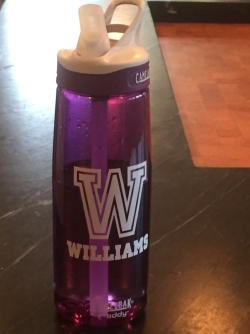 It’s funny. I have a Williams College camelbak water bottle.

I have a Williams class of 2017 tee shirt that I’ve cut to use when I work out. Williams sent that to my daughter when she got in. And the water bottle? I was given that when I led a leadership session for their diversity office.

In retrospect, I didn’t go for the silliest reason.

Back in high school, I was protective of who knew I was a Moonie. While I had worn a button with Rev. Moon’s face on it to school during junior high school, the reception I got from the other kids wasn’t all that great and I had learned my lesson. I told close friends at Stuyvesant, after I’d known them for a while. I didn’t want everyone to know. I realize now that many of my friends probably told other people – it was interesting news to say the least – but I didn’t know that then.

But someone in my high school class who was going to Williams knew I was a Moonie, and for reasons that are too long to explain, this person hated me. I had, at least somewhat because of my confusion about my faith, hurt his friend. Badly. And therefore he hated me. He thought I was scum of the earth actually.

So I was terrified to go to Williams. It was such a small school, and in my teenage brain I was convinced this person would use what he knew about me to ruin my life. I was certain he would tell everyone at Williams, and I didn’t want to deal with people knowing I was a Moonie. Especially since I was questioning so much.

I survived my turmoil at Cornell. I have some great memories and many great friends. And maybe things wouldn’t have been easier at Williams, but maybe they would have.

But I didn’t go. For the silliest reasons. And my daughter didn’t go, for better reasons.

Maybe my granddaughter will go.