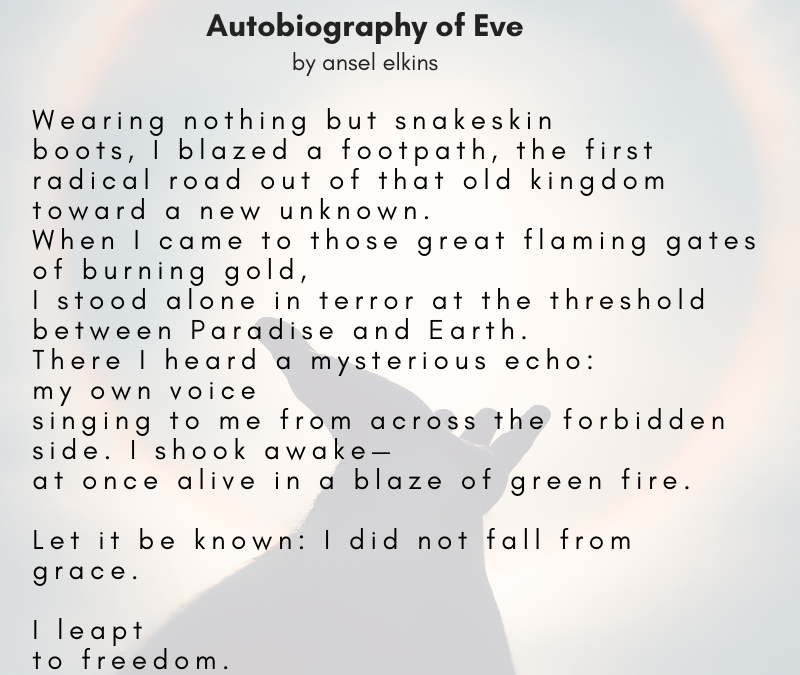 This powerful poem by ansel elkins was pasted in my Facebook group for Moonie Second Gens.

I don’t know if it resounds as deeply and mind-shatteringly for people who weren’t raised with strict, confining religious teachings – and specifically strict and confining religious teachings about Adam and Eve, Eve herself as the cause of all evil in the world, the “Fall of Man”, and the sinfulness of women overall – but for those of us who were, this poem is way more than stupefying and also wildly liberating.

Eve leapt to freedom. Eve did not fall from grace. Eve was not banished.

For those of you who know at least some of my story, you may remember that my Messiah (Moon) “banished” me when I was about sixteen years old. Very long story short, I was best friends with his children (the True Children) and also with a few Blessed Children (children born to Blessed Couples – couples who were matched by Moon and married in one of the mass weddings). One of the Blessed Children was seduced by our Sunday school teacher, and in order to keep attention off of her, she spread rumors about me. She told everyone that I wanted to have sex with all the brothers…Moon heard the rumors and believed them…he made a decree that only Blessed Children could play with the True Children…in order to keep me away.

In other words, my Messiah banished me. Just like Eve was banished from the Garden of Eden.

One of the miracles about to the moon and back being published is that I reconnected with nearly everyone who is mentioned in the book. Including my friend who spread rumors about me. Her cousin gave her my number and told her about to the moon and back, and she texted me and then called me. We hadn’t talked since we were maybe sixteen and I was banished. One of the first things she said to me was, “I’m sorry I ruined your life.” My response was immediate. “Oh honey,” I answered, “it’s okay. You had no choice.”

The reality is she didn’t have a choice at the time. She had to do what she did to keep herself somewhat safe.

The other reality is, Moon banishing me was my first step toward leaving, even if I didn’t know it at the time. Even if I didn’t appreciate it at the time. If my friend hadn’t done what she did, and Moon didn’t do what he did, maybe I wouldn’t have leapt to freedom. Maybe it would have taken me years, or decades, or lifetimes, to be free.

Maybe my friend actually saved my life, rather than ruining it. Even though she ruined it at the time.

And, at least as importantly, maybe I can leap for freedom now, again and again and again. I am learning to put down – to let go of – the incessant guilt that courses through me. It’s a heady combination of guilt and fear. A consuming knowledge that I’ve done something terribly wrong – that I am terribly wrong – and debilitating terror that I’ll be caught and punished.

But maybe I wasn’t banished. Maybe I didn’t fall from grace. Maybe I leapt to freedom.

Maybe I can don my snakeskin boots and hear my own voice singing to me. Maybe I can remember my power and beauty and wholeness. Maybe I can leap to freedom.

Maybe we can all leap to freedom. Because I do believe that free is how we deserve to always be.